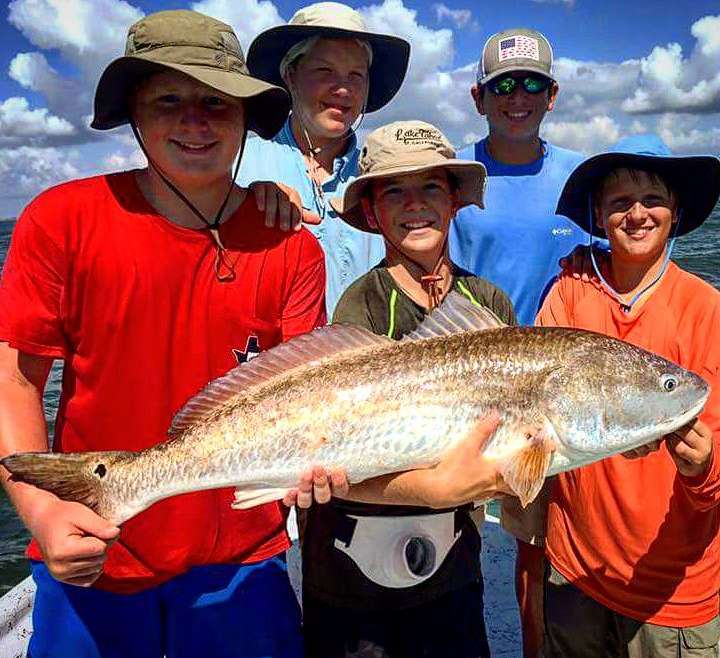 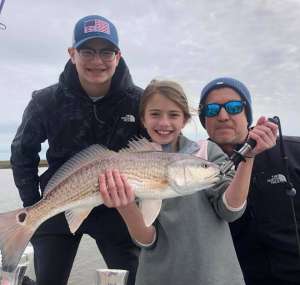 Out of the four seasons, Fall is likely the most anticipated by many folks in the Lone Star State.  School buses along the roads in town, Friday Night Lights, Opening of Dove Season, heading to the ranch to fill feeders, shorter daylight hours, the first sighting of teal making their way south, water temperatures falling, and amazing fishing along the Upper Texas Gulf Coast.

As a fishing guide in Galveston and Freeport Texas, I have always looked forward to the Fall Season.  This is a very important time for two of the three most sought after game fish in our bays.  Spawning season is upon us for Flounder and Redfish.  I will start with the Redfish and the patterns I have found every single year almost like clockwork.

The back lakes and bayous that have been filled with juvenile redfish are now holding nice slot redfish.  A redfish grows 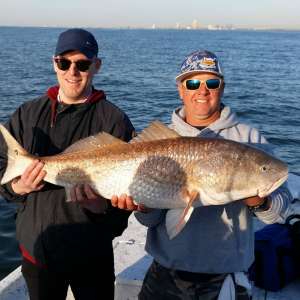 approximately 1 inch a month for the first two years of their lives.  After two years – they will grow only 1 inch per year.  September thru November are great months for fishing the secluded shallow back lakes for the bronze beauties.  If you prefer live bait – it is hard to beat a live finger mullet fished along the bottom.  Areas I like to key on is drains, drops and shallow mud flats adjacent to deep water.  If you prefer artificial baits – it is an awesome time to get in on some topwater redfish action.  A redfish exploding on a topwater plug in 2 foot of water will get anyone’s blood flowing! This is my favorite time of year to spend in the Texas marshes.  Not only is the fishing great… the wildlife that fills our marshes is amazing.  Thousands of ducks and geese will call the Texas Gulf Coast home throughout the winter. 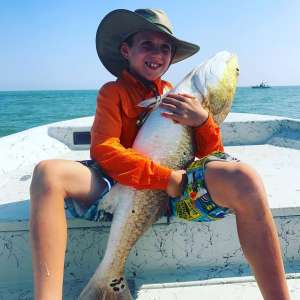 For decades one of saltwater anglers most anticipated “runs” is the Bull Red Fish Run.  This is a great time for boaters and non-boaters to get in on some Big Fish Fun.  Three most popular areas for bank fisherman to battle some Giant Bull Reds are the Texas City Dike, North and South Jetty, and the Galveston Beachfront.  September brings a key ingredient for the redfish spawn – bull tides.  Two-foot high tides combined with a common September weather pattern – high east winds are key ingredients for a successful redfish spawn.  Bull Reds will make their way from the Gulf to our passes to spawn.  The high tides will push the larvae deep into our marshes and back lakes where the redfish will spend the next couple of years growing.  My favorite areas to target for bull reds are the Galveston Jetties, the San Luis Pass and the mouth of the Brazos River.  The most popular way to catch the bull reds are with fresh shad fished along the bottom.  Other popular baits are cut mullet, fresh crab and live piggy perch.  As far as table fare, we always encourage catch and release of the large bull reds.  They are our breed stock and honestly not very good for eating.  Their younger offspring are the better fish for the grill.  20 to 26-inch redfish are your best for eating.

As the redfish run winds down to its final stages another amazing run is beginning.  The Fall Flounder Run has become more and 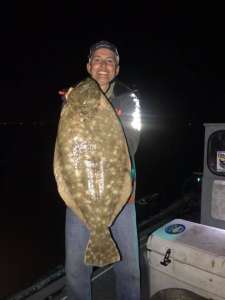 more popular each year.  We actually begin seeing flounder activity pick up in late August as daylight hours shorten, however the flatties really get active once the first real cool front makes its way down to the Texas Gulf Coast.  I can usually predict the first real cool front that hits our Texas Coast one way – The second district Highschool football game.  It never fails – the first front that will make me grab a jacket is usually around the second district football game… Every. Single. Year.  Now, we will begin seeing good flounder activities on our nighttime flounder gigging trips before the first front, but it really gets going after that water temp dives a few degrees.  I will be spending most of October gigging in the satellite lakes that will stage the flounder moving out of the bayous.  By the end of October – main bay shorelines will be where I spend most nights hunting flounder.  In November, gigging shuts down… but the rod and reel fishing for flounder is excellent.  Two major areas to target – The Galveston Channel and the San Luis Pass.  Most likely the most popular method for catching flounder is a live mullet Carolina rigged along the bottom.  This is about as much of a guarantee as you can get in fishing.  However, another great way to catch the elusive flounder is soft plastics bounced slowly along the bottom.  Texas Parks and Wildlife only allows us to retain two flounder per day during November, but this is a great time of year to catch a true trophy.

The Fall Season is upon us, and it is a great time of year to enjoy some spectacular fishing and some crisp cool weather along the Upper Texas Gulf Coast.  If you would like to get out and enjoy some of this great fishing – give me a call.  We also have waterfront lodging at reduced rates.  Enjoy a cup of coffee on the upper deck of Bay’s Landing and walk downstairs to catch the boat for a day of Fall Fishing.  Give me a call and let’s go fishing!  409-739-8526