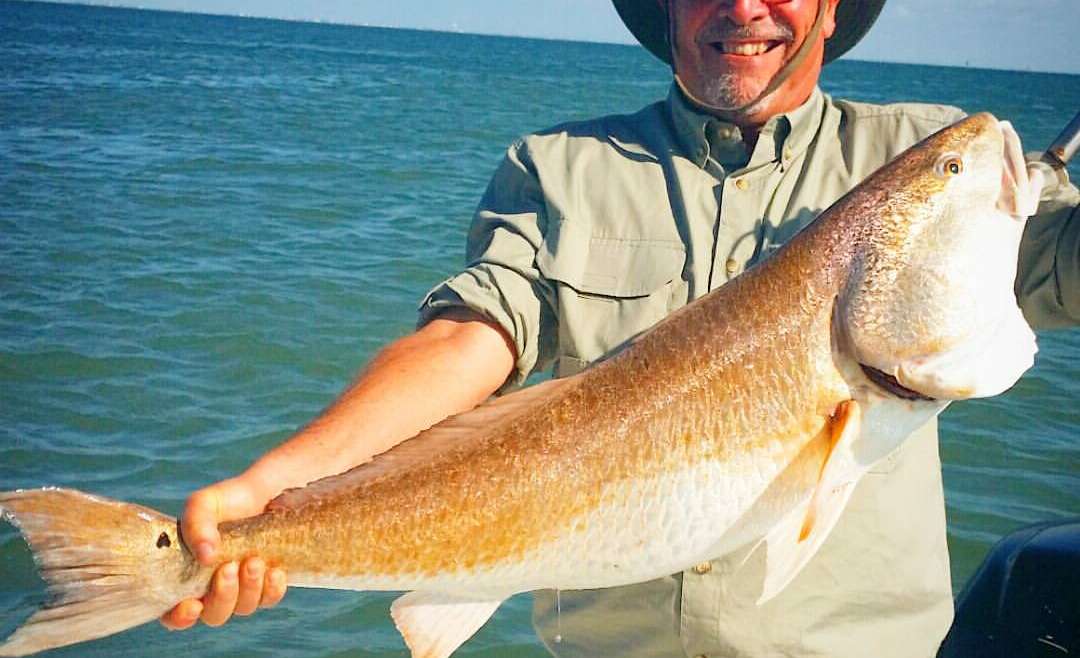 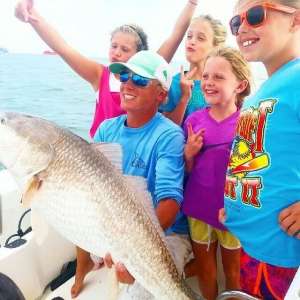 If there is one thing certain about Texas weather on the upper Texas Gulf Coast – the month of September brings high tides, low pressure, and stormy weather which are the perfect combination for spawning red fish in Freeport, Texas.  Bull Reds (name given to red fish over 30”) will come in from the Gulf waters to the passes of the Bays and lay their eggs. Between the third and fourth year, the red drum reaches sexual maturity. Spawning season is from mid-August through mid-October in 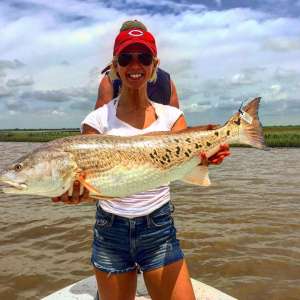 Gulf waters, near the mouths of passes and shorelines. Eggs incubate for 24 hours, and larvae are carried into tidal bays by the current.  The high tides of September play a major role in carrying the larvae to the estuaries, bayous and back lakes for the red fish to grow.  They move to quiet, shallow water with grassy or muddy bottoms to feed on detritus (dead or decomposing plant and animal matter).  As they continue to mature, red fish will feed on shrimp, crab, mullet, mudfish and even crawfish in the brackish bayous. Red fish have been known to live almost 40 years! 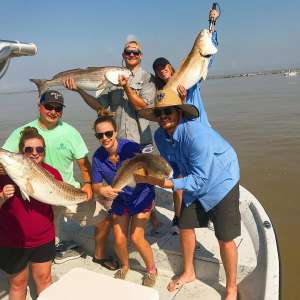 Last year, the Texas Coast saw a hurricane by the name of Harvey drop record amounts of rain on the upper Texas Coast.  We recorded 52” in less than 24 hours at my house in Santa Fe, Texas.  5 days after this tremendous amount of rain fall – I ran Fishing Charter and my clients caught bull reds until their arms could no longer reel them in.  What most people consider bad fishing weather does not set well with the bull red fish run.  High winds, dirty water, low pressure and high tides are a great combination to slam dunk some Freeport, Texas Red Fish. Areas that we target for these incredible fighting fish are passes from the bays to the Gulf.  The San Luis Pass, Freeport Jetties, and Mouth of the Brazos River are three major passes here along Freeport, Texas.  Also, anglers looking to fish from piers or in the surf have success as well.  Fishing cracked crab, live or cut mullet, shad, and dead shrimp along the bottom is a sure bet to hook into a giant Freeport, Texas Red Fish.  Click here to see last years video of slamming some Giant Bull Reds.

September is also a great month to target slot reds in the back lakes and bays of Freeport.  On a Freeport Bay Fishing Charter, we will target red fish, flounder and speckled trout.  Fishing mud flats, oyster reefs and drains with live shrimp under a popping cork and live mullet fished along the bottom are great ways to target these fish.

Freeport, Texas Flounder Gigging in September can be very good when weather cooperates, however typical September weather conditions is not 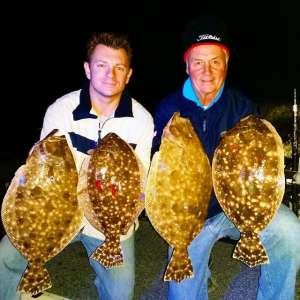 ideal for flounder gigging here in Freeport, Texas.  When the winds are lite – some very nice flounder are gigged.  We actually begin seeing increased amount of flounder activity in the shallows by mid to late August.  Less day light hours trigger flounder that their annual migration is not too far away.  High tides do play a major role with flounder gigging, but thru the years of running Freeport, Texas Flounder Gigging Charters, we have found areas that are actually only good and accessible with a high bull tide.  September flounder gigging can be rewarding many nights, and also very frustrating at times – but the great thing to know is October is not far away and cool crisp nights, high pressure, and clean water is great for Flounder Gigging in Freeport, Texas.

This past year, we began to offer lodging for our fishing clients.  Nestled on beautiful Oyster Creek in Freeport Texas with boat slips just down stairs – Bay’s landing has been a hit for our fishing clients.  Sleeping up to 11 guests, with an outside bar, tv, grill, piers to crab and fish from… and the best part – wake up and catch the boat for a great day of fishing!  At only $200 per night, you can not beat this deal.  Also, after an evening of Flounder Gigging – Bay’s Landing is the place you want the boat to pull up to!